Night on Earth: Streaming on Netflix

It isn’t easy to reinvent the wheel in nature documentaries, but Netflix’s Night on Earth feels like it has done exactly that.  It’s fresh, innovative content is absolutely captivating to watch, and isn’t what you picture.  I assumed that it would look like Blair Witch, black and green like the night vision footage of old.  However, they use the latest photographic technology here to capture what takes place in nature after the sun goes down by gathering all of the moonlight available.  Ultra-sensitive cameras maximize the small amounts of light available to allow us to see wild animals’ nocturnal behaviors in the African savanna and forestcanopy.  The camera work, and what the photographers captured, will leave you in complete awe. It reminds me of the lodge in the fallbecause it was amazing what happened after the sun went down! This is truly groundbreaking work here, so sit back and enjoy this one during your quarantine.

Of course, I had to give this show a go because of the name alone, but also because it is a Patagonia movie directed by Keith Malloy.  I think we can all relate to the unique and powerful relationship we have with the sea.  This program is told through the eyes of six people from various backgrounds, and you’ll experience what it is like to go deep water spearfishing for food, and of course surfing.  Fishpeopleis full of beautiful footage, and it does an amazing job of making you feel like you are actually there engaging in the varied activities portrayed. I am not a surfer and never have been, but this film does a wonderful job of translating the passion surfers share for those of us who don’t.  I even had an “ah ha” moment about why people love surfing as much as I love fishing.  If you want to take a nice Covid-free adventure from the safety of your couch, this short, concise doc is one to watch.

I do love to cook and have missed Anthony Bourdain greatly.  Thus, I was delighted to see that Chef David Chang captures his spirit here as he travels to various cities with celebrities to eat, drink, and soak in the culture. Each of Breakfast, Lunch, & Dinner’s episodes takes he and his companions somewhere new to enjoy these three meals in a culture other than his own. With such hilarious stars as Seth Rogan and Kate McKinnon added to the mix, this is a solid show on which to binge while you’re stuck at home. Seth Rogan, who was born and raised in Vancouver, narrates that episode and keeps the laughs coming the entire time. If you’re going to eat your way through Vancouver, who better than he to be your guide?

Into the Wild: Streaming on Netflix

One of my favourite books when I worked in Alaska was Into the wild, so this movie was a big release for me in 2007. It is, of course, based on the true story of Christopher McCandless, a young man who walked out on society to live alone and survive in the Alaskan Wilderness.  It is a very controversial story in many ways, as it elicits such polarized opinions on McCandless’ character.  In many ways, it reminds me of people’s opinions of Hadwin in the Golden Spruce(which we make all of our guests read).  Many people in Alaska believe that the idealistic 24-year-old wanderer essentially committed suicide.  However, I interpreted it entirely differently. Those who don’t believe that McCandless was praiseworthy certainly never appreciated this film adaptation.  However, it has much to offer, and given what is happening in society right now, it is a good story upon which to reflect, as the movie captures perfectly the “simple beauty” in nature that McCandless cherished and that drove him to find solitude.

Mile…Mile and a Half: Steaming on Amazon Prime

This is truly an inspiring story with breathtaking scenery that a Kickstarter campaign actually funded.   Mile…Mile & a Halfis a documentary that focuses on hiking the John Muir Trail (JMT) in California.  The cast includes a wide range of artists, and is an intimate look at the way the trail influenced each person.  The cinematography is extraordinary.  This film has single-handedly influenced an entire generation to take up backpacking, and it will be an influential film for the outdoor industry for many years to come.  Even if you don’t have any interest in backpacking, this doc is still well worth watching for a nice escape into some of the most amazing scenery the West coast has to offer. 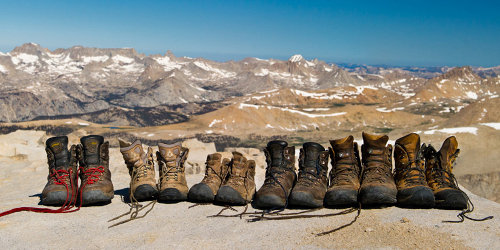