This last Fall I got a message from my neighbor telling me she had spotted some chinook salmon spawning in a pool on our local stream. It sounded hard to believe but she is one of the most fly fishing obsessed people I know and so I was pretty sure she would know the difference between a salmon and one of the larger brown trout that lurk in some of the deeper pools. I explained the possibilities to my son and daughter and told them to put on their jackets and boots.

They’re always game for going down to the creek  and in seconds we were heading down the hill behind the house, our feet crunching over white grass, still ridged from the last night’s frost. An iced wind ripped flurries of yellow leaves off the willows and poplars that floated past my kids as they weaved ahead down the crooked trail that ends up at the pool near my neighbor‘s house. The stream is fairly small, no more than 25 feet at its widest with riffles only inches deep and occasional knee deep runs.  Deeper pools are few and far between and its hard to imagine that a big chinook would find its way up such skinny water.  We came around a sharp corner of the river and the pool came into sight, deep and dark and barely moving. We walked up to its edge and watched the calm surface dotted with leaves.

“There’s nothing here”, my daughter said bending down to grab a handful of rocks and begin her routine river assault.

“Just wait, let’s watch it for a while.”

Then down toward the bottom of the pool where the water begins to slide faster over the shallow lip a dark shape arced and twisted across the surface, sending a large wake across the flat calm.

“’There they are! Down there!” I yelled, the echo from the cliff wall reminding me not to completely ass out over this.

We walked down to where we saw the roll and there in the shallow water of the tail out were two chinook, male and female, swimming side by side over a circle of clean bright gravel.

“They’re already spawning.” I explained, “the female is digging out her nest to lay her eggs. Those clean pebbles are exactly what they like.”

“Huh?” I could tell it would take a little more to explain what was happening.

“There here to make baby salmon” I threw out to see if that would hold them.

We watched the two salmon swerve and reposition around each other and then realign back to steady parallel slabs until finally the female turned on her side and began undulating over the clear pebbles, sending a slight cloud of dirt into the transparent water.

“Ooohhh!!”, they both harmonized. Totally impressed, but still not clear what this is all about. 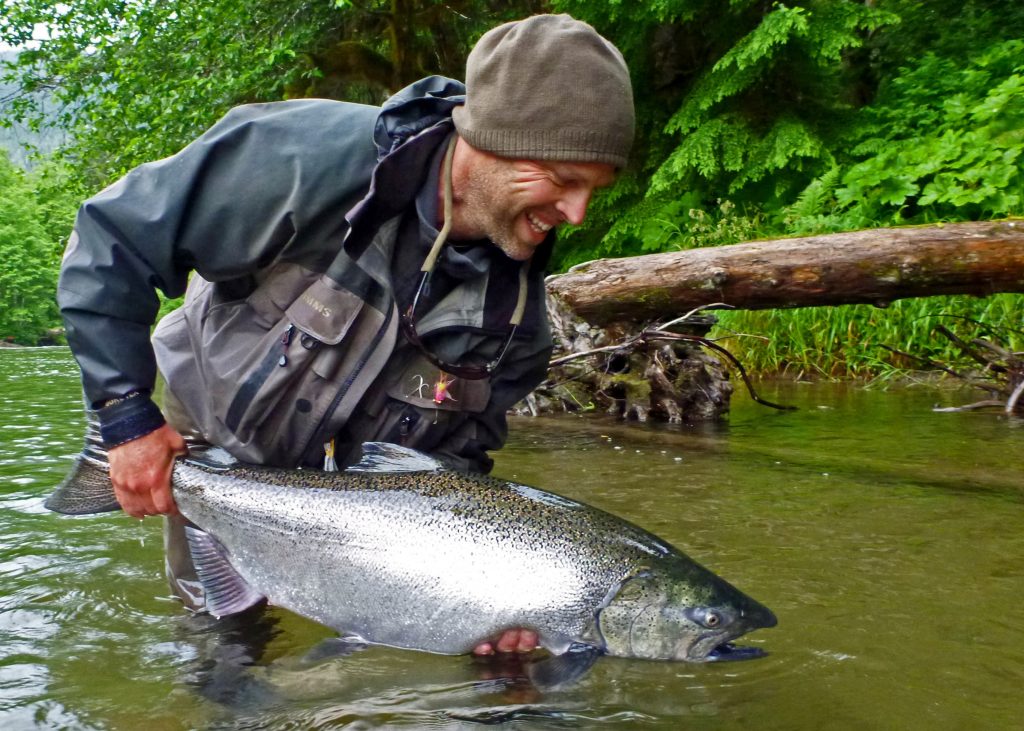 I explained how they aren’t from here, none of them are from here, they may have started here or in some other stream, but they came from somewhere far away in the ocean, but before that they came from the other end of the earth and only got here with people’s help. They got big eating in the ocean where there is a lot more food and now they’ve traveled all this way up here to lay their eggs so their babies can be born and then they can go out to the ocean and get big too.

“Why do they need to come all the way here out of the ocean to have their babies?”

“Do they go back out to the ocean with their babies?”

This was going to take a little time. We watched the pair for a little while longer as I explained as much as I could before their attention faded. They eventually had enough and started walking back up the trail while I stayed watching a little longer. I felt like I could sit and watch these fish for hours, just pumped to know they’ve now found their way up here into my home stream.

The chinook salmon’s history in Chile goes back over a century but it’s real proliferation didn’t begin until the late 70’s and early 80’s. The first attempts to introduce them were back in the late 19th century around the same time the rainbow and brown trout were first being successfully transplanted throughout southern South America. But because of the lack of proper aeration techniques the chinook proved to be more vulnerable than the trout and none were able to survive the journey. It wasn’t until proper oxygenation and refrigeration were incorporated in the late 1970’s that these salmon finally were successfully introduced in a sea ranching experiment on the Rio Pratt, a river to the far south of Chile near the town of Puerto Natales. A few years later another successful planting took place on small river on the island of Chiloe.

Following this chinook were then brought from different areas of the the Pacific Northwest to be raised in the growing number of salmon farms showing up throughout the labyrinth of islands and fjords south of Puerto Montt. In the early years of this booming industry there wasn’t much care taken to prevent the holding pens from being damaged by severe storms, sea lions and orcas. This usually resulted in frequent salmon escapes. The chinook from these farms were not sterile and were able run up new streams and reproduce with other escaped salmon or with salmon from other already established runs. This interbreeding has resulted in the present generations of chinook in Chile having very mixed genetic origins from areas all throughout the Pacific Northwest, along with recent findings of a distinct genetic identification believed to be a strain now unique to Chile.

Since the salmon were successfully introduced they have gradually spread throughout the river systems along the southern Chilean coast. It is a continuing developing process with some rivers that didn’t have salmon 15 years ago now seeing significant returns. This is typically caused by a percentage of salmon that don’t return to their natal stream and “stray” up a new system. By doing so they then potentially establish a new return when and if their offspring come back to that same river. There are thousands of rivers in southern Chile and only a small percentage have all the necessary characteristics that chinook salmon need to successfully reproduce. But the chinook are slowly finding those suitable rivers and establishing populations, even making it around Cape Horn and into many rivers in Argentina that now are seeing legitimate returns.

It’s still relatively early in the process and there are so many factors that can influence whether chinook are able to successfully spawn and then survive once they make their journey to the ocean. One of the disadvantages of newly established runs is there hasn’t been time to develop the staggering effect caused by some fish returning to spawn after different amount of years in the ocean, the average being 3 to 4 years.  If a return or their offspring is negatively effected one year by severe climate factors or pour ocean conditions the consequence can be felt more heavily when it comes time for those offspring to return. It could explain why we are seeing such big fluctuations in chinook returns on the rivers that I guide on. One year we can see good numbers of salmon all throughout the season and then the very next year we will only see the occasional fish. Run sizes are hard to estimate or forecast because there has been such few studies done on the chinook and so far no long term or ongoing research is in effect.

It’s a slow process and tough to say how  much larger and consistent the chinook runs will develop into. It could take generations to really see what their possibilities are. Since I first arrived in Chile in 2001 I have seen some rivers’ populations increase while others have fluctuated wildly between larger and smaller returns without any real significant overall increase in return size. The most remarkable changes have been on the smaller coastal rivers. There are numerous little systems that just a few years ago would only see the occasional chinook caught while now these rivers are seeing returns up into the thousands. But even these rivers are not exempt from seeing wide fluctuations in run size from year to year.

With the chinook’s arrival there are have been some protests over their introduction and the impact they’ve had on the native species. This is a tough subject, with any change in an ecosystem there is going to be an imbalance until nature finds a new equilibrium that may or may not include the introduced species… and the same goes for the species that were already established. Yet by far the majority of Chileans seem to enjoy having  salmon in their rivers. It is becoming an increasingly targeted sport fishery and it’s hard to find anyone who doesn’t enjoy eating one.  This is not an argument for a free for all and to introduce whatever seems like a good idea at the moment. That period has come and gone in Chile and the government is now extremely careful about what gets brought in. But the salmon made it in and have been here long enough that they have become something we are accustomed to. Whether something or someone is not native is generally forgotten by most within a generation or two. They or it become a part of what is assumed, a part of someone’s memorable experience that eventually melds into nostalgia and belonging.

Walking  back up along the stream bank toward the house I kept thinking about the lone pair in the tail out. It’s good to see something so familiar somewhere that seems both out of place but also right where it should be. I’ve had a lot of good memories that involve chinook during my years living in the Pacific Northwest and Alaska. And here our paths cross again, now as fellow immigrants trying to make a go of it in foreign waters that are eventually becoming just as familiar. I watched the kids scale the hillside up to the house and imagined what it would be like if the chinook make it, if we might someday see pods of fish torpedoing up through the shallow riffles each Fall. For my own nostalgic wishes I hope they do, I hope the next generation will come back to the the only home waters they’ve ever known and become something we look forward to along with the the changing leaves and the frosted grass mornings.