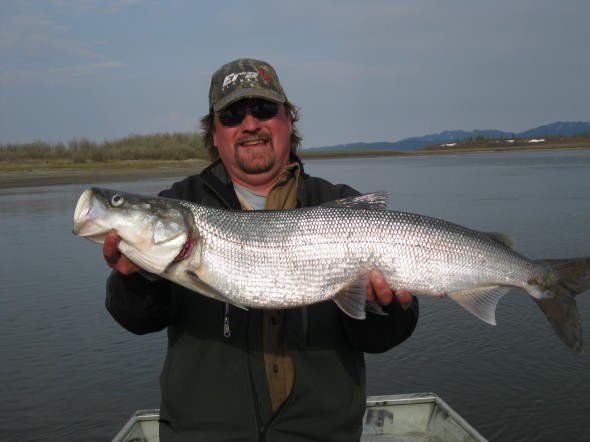 Curious about sheefish? To most this is a very unfamiliar species. A member of the whitefish family, the sheefish is nicknamed the “Tarpon of the North” due to its silver-scaled torpedo shape, elongated head, and deep, cavernous mouth. Many years ago sheefish were a subsistence food for Inupiat Eskimos and still today they harvest them in the summer and in the winter under the ice, although to a much lesser degree.

In Alaska, sheefish were once really abundant, particularly in the 70’s. June and September were the premiere times to go find them. Anglers could fly a section of the river and see a huge school of feeding sheefish to target. Although the species is still considered a premiere sport fish throughout Alaska, now they are really hard to go target on a trip.

The windows to catch them on a fly are very sporadic and many trips planned solely for sheefish go horribly wrong. These trips usually end up with you catching pike and burbot instead, I’m afraid (no offense to you pike fisherman out there). Opportunistic feeders by nature, sheefish gorge themselves on salmon fry, smolts, and juveniles. When they get schooled up on a migration of fry, a feeding frenzy begins. This is when you have a very good chance to catch them on a fly. 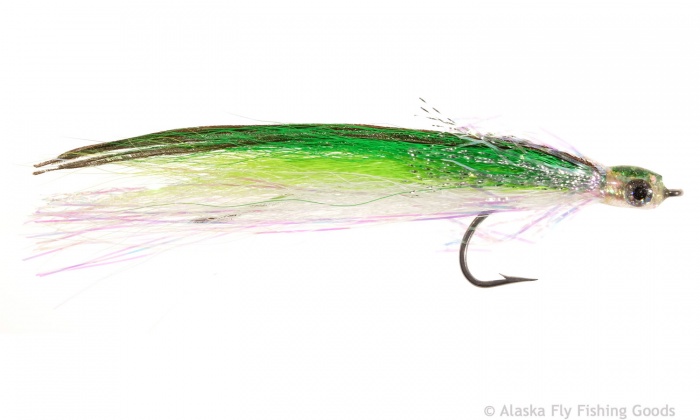 When I worked in Alaska, I heard my boss speak of sheefish, so I would often inquire about pursuing them. My boss for 12 years was the famous Ron Hayes, who has been guiding in Alaska since 1957 and has racked up 27,000 hours flying in the wilds of Alaska. Ron had a pretty good connection for sheefish up on the Holitna River by the name of Rocky McElveen of Alaskan Adventures. This was a hike to get to from our lodge in Bristol Bay; in fact the Holitna is located an hour and a half north by way of float plane from where I was working.

When Ron first took me to meet Rocky, I really had no clue what I was in for. All I knew was that the Holitna was a tributary of the Kuskokwim River, which is the second largest system in Alaska behind the Yukon River. It is 238 miles southwest of Anchorage, and to me it seemed like the farthest corner of the earth. When we touched down, Rocky pulled up in his boat to receive us and quickly made us feel right at home with his warm, good-hearted nature. He wasn’t the tussled, beat up bushman you would expect that far remote. Instead he was a very intelligent, well-spoken man of the cloth. He served two tours of duty in Vietnam in the Navy, wrote a book entitled Wild man, Wild Alaska,and served many years as a pastor in California. Rich in history and not short on words, he was getting me pretty pumped up to cast at my first sheefish.

We jetted out to the confluence of the Kuskokwim and Holitna, knowing the sheefish didn’t like to get too far into the system at this time of year. Sheefish are quite prevalent in the Kuskokwim drainage. Only found in the Arctic and sub-Arctic zones of North America and Asia, they are probably one the most unique fish you can find in the world. In essence they are a giant ocean-going whitefish that can reach over 60 pounds with the right conditions. On the Holitna River, they rarely get over 25 pounds. They pretty much live in brackish water near outlets, or in the delta areas of the huge rivers. Basically they live in the estuaries for the most part.

Photo by Rockys Lodge Alaskan Adventures.  Look these guys up if you want to catch sheefish

My first cast was close enough—at least, I thought it was—but nothing happened. Guess it wasn’t going to be as easy as I thought. I continued to work the pool, adjusting strips and depths, but nothing was happening. I could tell Rocky was losing hope, as he knew the fish could literally disappear at any time.

I grabbed another large pattern out of my box that was longer and more sparse. It was a dace fly. I cast slightly beyond the fish on a tight angle and began stripping the second it landed.  This time it came tight. An airborne sheefish weighing about 15 pounds blew up the pool. I’m not sure who was more surprised: me, Rocky, Ron, or the fish. But I knew I better not waste the opportunity. The fight went on for 7 or 8 minutes, and after a lot of short runs and explosive surface eruptions, I had my first sheefish in hand. They are beautiful fish, more unique than anything I had ever seen. The over-sized scales shimmer a bright anadromous silver. The large mouth has an extremely pronounced extended lower jaw, giving it a very prehistoric look.

I was in awe of the whole experience. These Kuskokwim Sheefish grow extremely fast. At 2 years of age they already measure about 16 inches; the fish I caught was probably about 8 years old.  Sheefish actually live to around 20 years old—these ancient, fully grown fish are the true monsters you occasionally hear about being caught. 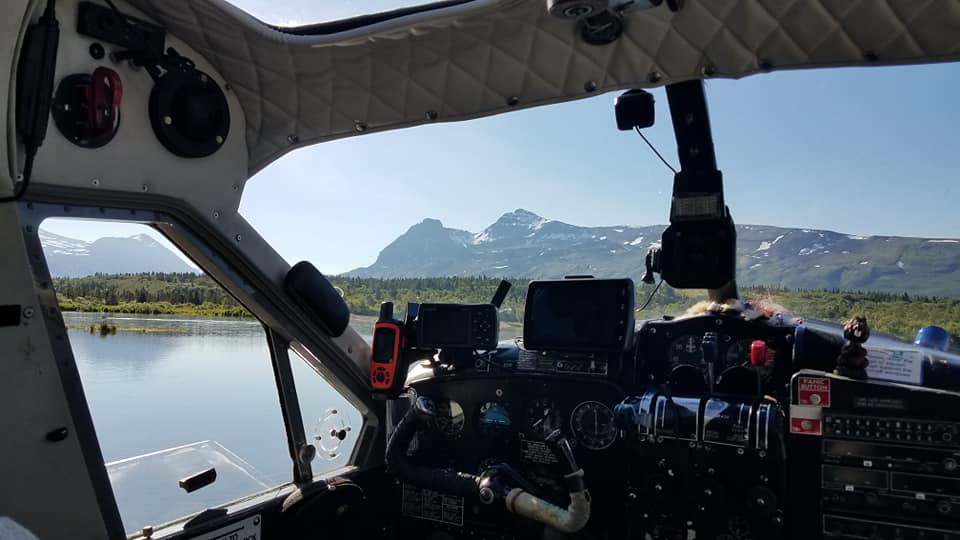 After releasing this fish back into the mysterious waters of the Holitna, it quickly became apparent that the pod was long gone. They had either dropped deep into the speedy pool beyond what I could reach with a fly line or dropped back into the Kuskokwim looking for more fry.  Either way I felt very lucky to have caught that short 20-minute window that gave me the opportunity to land one of the most unique fish in the northern hemisphere. 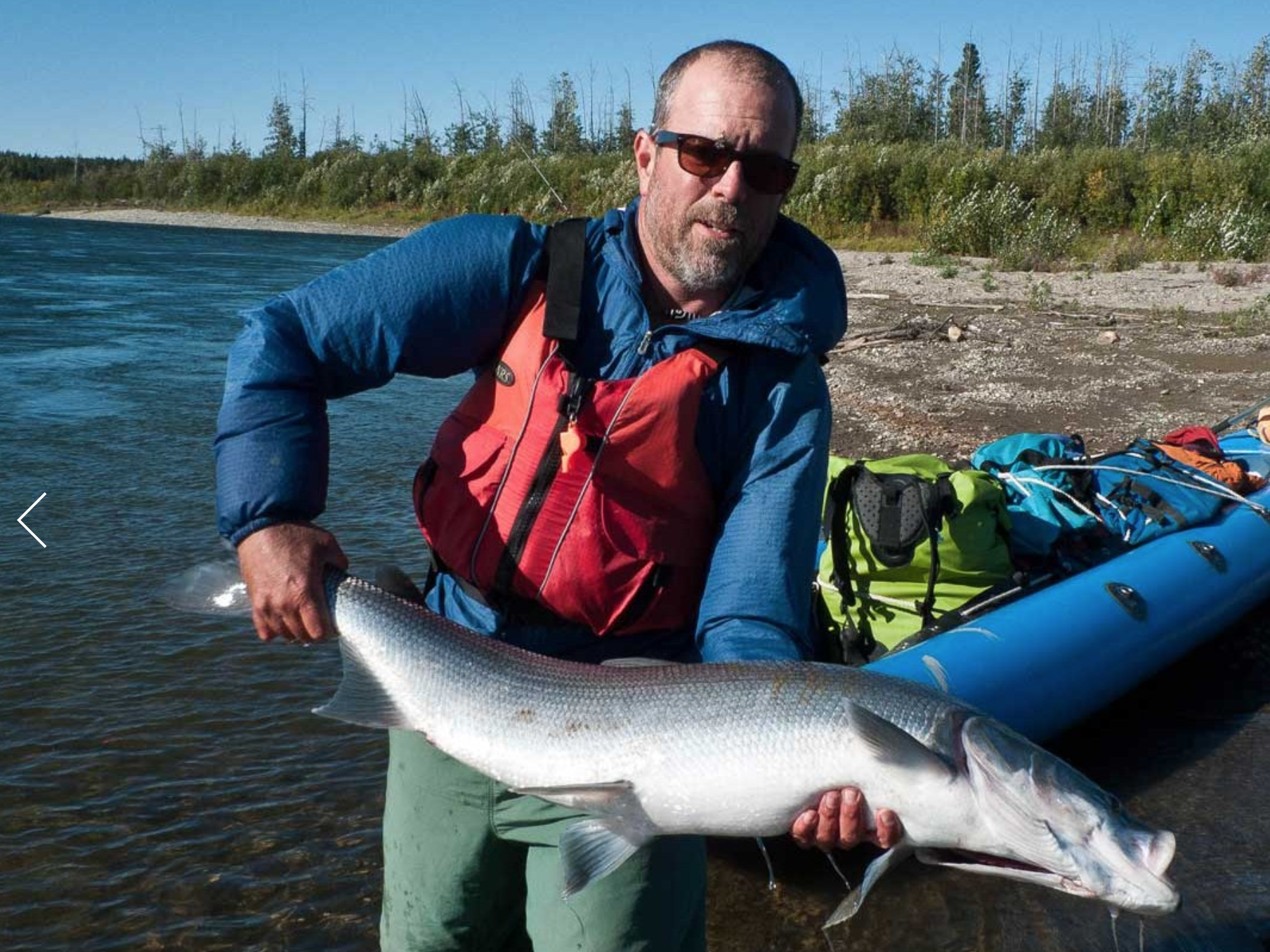